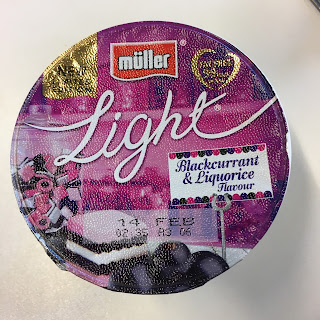 Müller seem to have a new flavour out every time I check out the yoghurt aisle. This one called to me with its lovely deep purple cover, then repulsed me a little with its inclusion of liquorice. It also has blackcurrant though, so I was tempted, and I don't hate liquorice as much as I used to, so I figured it was worth a go.

I went into this expecting to hate it, but it's actually pretty good. The blackcurrant is at the forefront of the flavour, it's a dark, slightly bitter, but very nice fruity taste. I thought the liquorice would ruin it all, but it presents with a smooth undertone. It's not strong, but it is noticeable, and while it's definitely not my favourite flavour, especially in a yoghurt, it actually blends pretty well with the blackcurrant here, adding another slight layer of bitterness, but smoothing out the sharpness a bit. It's a bit of a different flavour for a yoghurt, but it's pulled off quite well. Certainly not my favourite, but much better than I thought it would be.