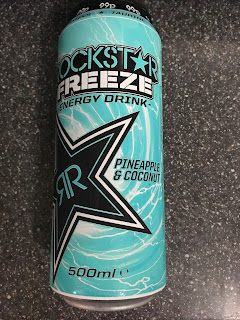 I don't normally go for the Rockstar energy drinks, the Relentless and Monster flavours are normally so much better. But I'll always give it a go when a new variety comes along, even though I've been burned in the past by some really sickly, syrupy drinks. This one seemed like it would be a little cleaner though. Maybe it's the fresh blue packaging, maybe it's the nice fruity sounding flavour, but I had some hope for this, even if I'm not the biggest fan of coconut.

I have to say this is pretty good. It doesn't have the sickly taste I've found with other Rockstar cans, it's pretty clean and fresh, and the pineapple and coconut are very noticeable. It is predominantly coconut, which is a bit of a shame, but it's all very well represented, so I'm not mad. This is a refreshingly tropical energy drink, and probably one of the best Rockstar cans I've tried. Keep it up, guys.