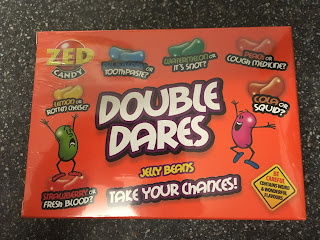 I picked up a box of Bean Boozled some time ago now, and was mightily impressed with how close they were to making me physically sick. It seems more people want their fingers in the nausea-inducing pie, as here we have another offering, from Zed Candy (I've never heard of them). Here we have six colours of jelly beans. They could be your regular fruity flavours, or they could be something weird and gross! Check these out, we've got squid, snot, rotten cheese, and... fresh blood?! Wow, that's a dark turn. Especially the tiny jelly bean on top seemingly fearing for its life.

These are alright, pretty middle of the road really. The fruit flavours are nice enough, but they're not particularly bold. The disgusting ones are what you came for though, so let's cover those. Some are pretty tame, like the cough medicine, which is basically just a strong aniseed. I'm not sure why toothpaste is considered the disgusting flavour, it's just a mint jelly bean, which is actually quite nice. As for the squid, snot and rotten cheese, they're pretty disgusting. Not quite vomit-inducing like the Bean Boozled, but the rotten cheese especially was authentic enough to produce a little gag. I can't say I've eaten snot recently, but I imagine it tastes kind of like how the bean tastes. The squid just has a strange flavour. I like squid, but I don't like the jelly bean, so I think it's a bit off. Disgusting though, so I guess that's all that matters. So last, but not least, the fresh blood. It basically has a metallic taste, which gives it a fairly distinct blood-like flavour, so I guess they've put some effort in there.

This is an odd mix of jelly beans. From lacklustre fruit flavours to not-so-disgusting bad flavours, to semi-authentic gross out offerings, I'd say overall these are a nice enough alternative to the Jelly Belly, but not particularly great in their own right. Stick with Bean Boozled, it might be a little more expensive, but if it's disgusting you're going for, you can't get better than that.