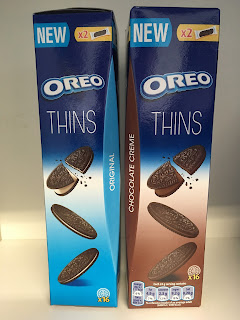 Oreo Thins. They're like Oreos, right, but they're thin. I mean, I like a new product as much as the next guy, but sometimes I just pause to wonder whether some things are necessary. What is the purpose of a thin Oreo? I assume they're jumping on that diet bandwagon, and offering a way for you to get your Oreo fix with less calories. That's fair enough, but let's look at how they're packaged. Your regular Oreo snack pack contains two regular sized Oreos. Not that I agree with it, but it's apparently a portion. Those two Oreos contain a total of 105 calories. Now let's turn to the Thins. A portion of Thins is four cookies, which total 147 calories. More calories, you see? More baffling still, these are bundled up into two separate foil packets of eight cookies each, so what's the motivation to stop at just four?

So while looking up all that, I discovered that apparently Thins are not designed to be a "diet" form of Oreo, they are meant to be a new, sophisticated way of snacking aimed at grown ups. I had no idea Oreos were meant to be for children, because it seems everyone loves them anyway. So I need to have a thin biscuit to look sophisticated? All it does is give me fewer options of how to eat it. There's no twisting or dunking involved with these, it's a straightforward hold and bite, and I'm guessing the expectation is that your little finger is extended while you do it. Well, I'm not buying it (clearly I did buy these, but you get my point).

Moaning aside, these are just the same as regular Oreos, but thinner. They're pretty crisp in comparison to the thick ones, and that does give them a certain je ne sais quoi. They taste good, the proportion of creme to cookie is good, and the chocolate version is just as awesomely sweet as ever, so I really can't slate these too much, just the idea of them. Plus I used a nice little bit of French up there, so clearly they're already making me more sophisticated. If you want to try your Oreos thinner, then these are a good shout. I just don't fully understand why you'd want to.