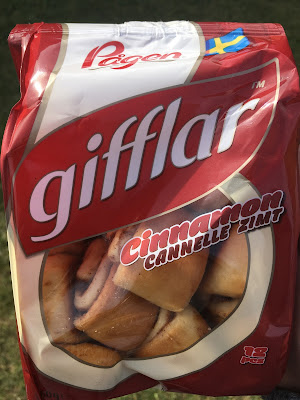 I picked up a couple of bags at these at the boot sale today, but it looks like they're also available from supermarkets. They're mini, ready to eat cinnamon rolls! Now, I had no illusions that these would be anywhere near as godly as Cinnabon, but I figured it was worth grabbing a bag and getting some cinnamon goodness. They couldn't be that bad, they're dough with a cinnamon filling, what could go wrong?

I was right, these aren't as good as a giant, freshly made cinnamon bun coated with icing. Funny that. But these are some pretty good cinnamon rolls. The filling is pretty generous, with a creamy texture and a sweet, slightly spices flavour, just the right amount of cinnamon crammed in there. As for the dough, it's not the best, it's a little stodgy, but it's still soft satisfying, and it works well with the filling. I also tried sticking them in the microwave for a little while, and that really softened them up, these are great warm. Next time I'll try a nice thick coating of icing to really bring them up a notch. As they are though, these are some pretty good cinnamon rolls. Bitesize, ready to eat, a damn good snack.