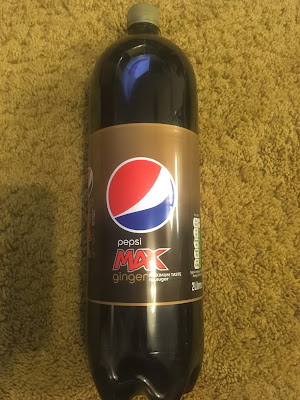 This was definitely a surprise for me, a new flavour of Pepsi Max that isn't following the usual cola trends. Cherry cola, that's a thing, along with vanilla and lime, but I'm not sure I've tried a ginger cola before. I enjoy a ginger beer, but this bottle seems like it will deliver a combination of the two.

This is pretty good actually. The ginger flavour is pretty strong, and mostly accurate. A bold taste that provides a nice warming spice, and lingers for sometime after, I'd say it's a very decent effort. The combination with the taste of the Pepsi is a little odd at first, but I did get used to it after a little while. It works quite well together, giving the whole thing a slightly botanical flavour, although the lack of sugar is noticeable in the after taste. I wouldn't say this stuff beats a good old fashioned ginger beer, but it's a pretty original variety of Pepsi that's pulled off pretty well. I hope this sticks around for a while.