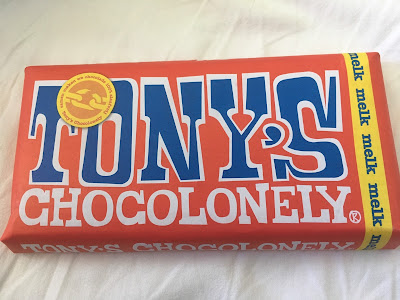 I know it's been a couple of weeks now since I went to Amsterdam, but it turns out I failed to review this lovely little chocolate bar I picked up while I was there. This is Tony's Chocolonely, and I was instantly drawn to it due to its colourful design, as well as its thickness. This is a beast of a bar, and there's not much to say about it other than it tastes fantastic.

This is real chocolate, creamy goodness with real cocoa butter that just made me long for more. It's a thick bar, so each chunk is filling and satisfying, but it's so moreish I tended to keep going until I physically couldn't eat any more.  I picked up a couple more bars to take home with me, and every one I opened was like unwrapping a Wonka bar. Dairy Milk may be the go to bar in this country, but it's clearly suffered in quality as of late. A bar of Tony's though, that's the good stuff, and I'm pretty sad that it's only really available in Amsterdam. What's more, they stick to strict rules regarding the origin of their ingredients, being vehemently against child labour and entirely Fair Trade, and that's only a good thing, especially if it makes chocolate taste this good. The best snack I found in Amsterdam.