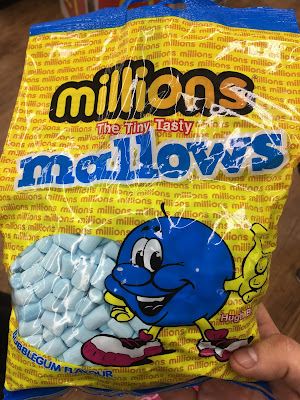 When it comes to chewy sweets, Millions are probably some of my favourite. They're delicious, and come in a vast array of flavours. But apparently Millions weren't enough as just a chewy candy, as now you can get them in mini marshmallow form. They're bubblegum flavoured, and they're very small, and there's a lot of them. Maybe not millions, but a fair amount.

Marshmallows seem to be a popular choice for sweet companies to branch out to, I guess it's hard to get them wrong really, and these are pretty good. They're soft, and pack quite a bit of flavour. I wouldn't say bubblegum is the best type of marshmallow, but I couldn't tell you which other variety would have suited these better. It's a good bubblegum, nice and sweet, and it works well in conjunction with the soft chewiness of the mallows themselves. So yes, these are a good effort. I wouldn't say they necessarily need the Millions name, as they're a far cry from the classic hard sweets that get stuck in your teeth. But still, a decent offering, and one that will probably fit in your mini marshmallow gun. You've got one of those, right?