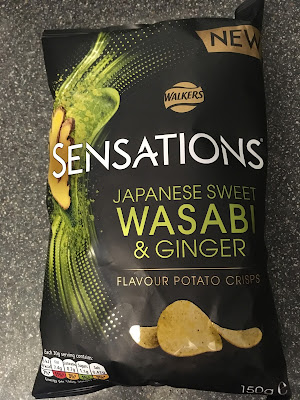 I don't like wasabi. I've tried to get into it on several occasions, but it's just too much for my taste buds. Same with horse radish really, I can't do that kind of spice that gets right up in your nose. So I picked this bag up knowing full well that I might not like them, after all, the wasabi is right there in massive letters. But hey, it's a new flavour of crisps, I had to try it out, and maybe this would be my gateway into wasabi love.

Nope, I still don't like wasabi. The first taste you get with these crisps is a fairly authentic version of it, a fairly intense hit of spice that takes over. I wasn't a fan, but that flavour soon gave way to something else. The back of the pack actually attempts to walk you through it, saying first you'll taste wasabi, then onion, and finish on ginger. They're not too far off actually. The initial spice gives way to a much more mellow, sweet onion-like taste, and after that there is a certain warmth. It doesn't particularly taste like ginger, but it's a nice finish, and surprisingly it left me wanting to try another one. Until I tasted the wasabi and regretted that decision. It was a vicious circle. So yes, these crisps taste like wasabi, but there's more to it than that. I figured I'd hate these, but I have to admit they're not all bad. I still can't recommend them too much, but it's a decent effort with some authentic flavours.