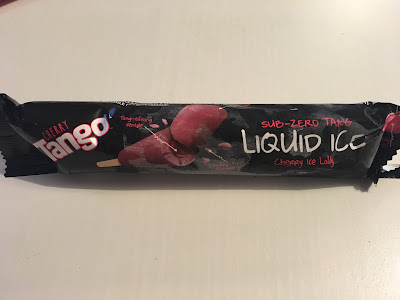 I reviewed the orange variety of these Liquid Ice lollies a while back, and was unaware that these came in a different flavour. I can't say I was overly impressed, although they weren't bad. I'll say that these cherry ones are a lot better, but I may be biased seeing as I'm always a fan of the darker colours. These are cherry flavoured ice lollies, which have a pretty bold, juicy flavour. That regular lolly soon gives way to the centre though, which very much does fit the term "liquid ice". It's frozen, but also fairly soft and almost runny, it's a great cold, refreshing filling that packs a lot of tang and adds even more flavour. My major gripe is that the filling only lasts halfway down the lolly, but otherwise this is a great effort, and much better than the orange in my eyes. Tango has made a hit for the frozen aisle.