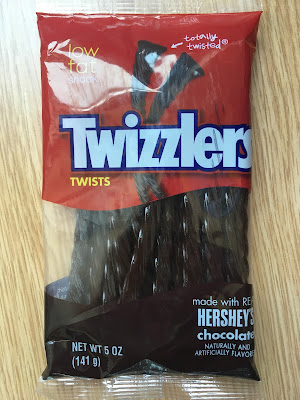 B&M have stocked several varieties of Twizzlers over the years, and I can't say I've been fond of any of them. I fail to see how they're so popular in America, they seem like mostly flavourless rubber to me. But the other day I found these chocolate Twizzlers, which promised the Twizzler experience couple with Hershey's chocolate, another American delicacy that I am not fond of. Hershey's is gross chocolate, and tends to leave me with an after taste I liken to vomit. So with those opinions in mind, it's fair to say I expected nothing good from these chocolate flavoured twists.

I didn't hate these, not with the fiery passion that I assumed I would. Unlike a lot of the Twizzlers I tried, these actually have some flavour, and it is slightly reminiscent of chocolate, so in that way I was quite surprised. However, I would not say these are good. The combination of chocolate and chewiness doesn't sit right with me, and the more I chewed, the less authentic the chocolate became, and by the time I was finished I was left with that chewy lump of flavourless Twizzler that I'm used to. So yeah, chocolate chews, not awful, but not really a good idea. These ain't like Riesen, they're a pretty unholy match.