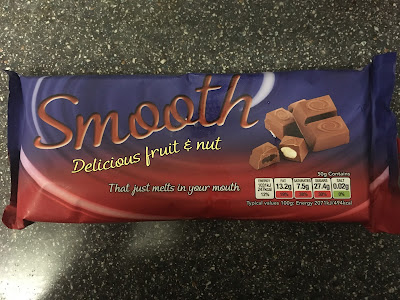 Poundland seem to be putting out a lot of knock off chocolate products lately, with such truly awful offerings as the Easter-themed gritty sugar-filled Spoon It Outs, and the horrifyingly designed packaging that houses equally horrifying fake M&Ms that are Choccers. I neglected to buy up their version of Minstrels, safe in the knowledge that they would be just as inedible as the M&M attempt, but on my last trip I see they're expanded to chocolate bars, taking after some of the big name brand varieties. Now, this isn't specifically stated to be made by Poundland, instead the wrapper informs me that it's made by a company called Smooth!, although the paragraph that tells me that is Spanish, despite the company being based in Birmingham. That sort of set the tone for my assumption that this would be some very low quality chocolate. I went for the fruit and nut, because even if the chocolate was bad, at least they can't screw up raisins and almonds, right?

You know, I consider it part of my job to sometimes seek out those truly awful looking products, if only to confirm what everyone thinks and to warn off anyone thinking of picking them up. Most of the time, those foods I think look awful actually are, and I can consign them to the rubbish pile and never look at them again. Sometimes, however, I am wrong, and this is the case here. This chocolate is not awful, in fact, it's not bad. Just looking at the ingredients shows that cocoa butter is a predominant ingredient, which is something some bars are lacking these days, and that cocoa presence is clear in the flavour, this is actually quite a creamy bar of chocolate. It's not perfect, but I was extremely surprised by how much I liked it. The raisins are a good addition, a nice fruity chewiness that adds some flavour, but the almonds could use a little work, they're very soft and the taste doesn't exactly shine through. What I will say though is that this bar is thick, thicker than the Dairy Milk bars of the same size, and in my opinion, a thick square of chocolate is more satisfying than a thin, drawn out one, so that's another point for this here bar. This is some pretty good chocolate, and it goes to show that gems can be hidden in plain sight. Try this out, don't judge a chocolate bar by its wrapper.