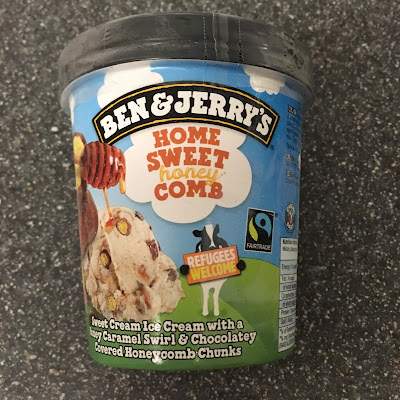 Many thanks to DestroyED, who informed me earlier today that alongside Berry Neighbourly, there's another new Ben & Jerry's flavour hitting the shelves. Naturally I went out and bought it straight away. Berry Neighbourly appears to be a Tesco exclusive, but this one lacks the type on the top of the tub, so hopefully you can pick it up anywhere. This flavour is a very honey-themed one, boasting a cream ice cream with honey caramel swirl, embedded with chocolate covered honeycomb pieces.

If you like honey, you'll like this. Well, as long as you like ice cream as well, I suppose. The ice cream itself is lovely and sweet, creamier than the regular Ben & Jerry's vanilla, I very much enjoyed it. The swirl throughout has a fantastic natural honey flavour, alongside a sweet hint of caramel, both lending to the thick, almost syrup-like texture. Unfortunately, there wasn't as much swirl as I'd hoped, but what was there was pretty great, definitely lending to the honey theme. Where the swirl was lacking, there were plenty of chunks to make up for it. They ranged from tiny to fairly sizeable, but each one consisted of a nice thick chocolatey coating, and some satisfyingly crunchy honeycomb underneath. Pretty much like little chunks of Crunchie, swirled into some nice ice cream. Not a perfect tub, it's a little bland in some places, but a decent attempt at a nice unique tub.