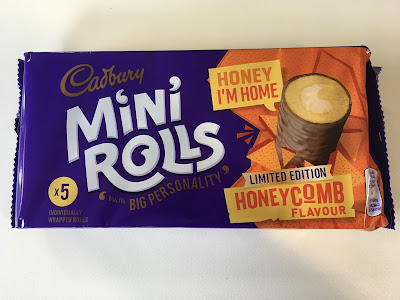 I do like it when a limited edition Mini Roll hits the shelves, although they haven't all proved to be winners. Here we have a honeycomb flavour, but will it sit alongside the raspberry ripples or the blackcurrant bites? This Mini Roll contains a honeycomb flavour filling, and a "pale orange sponge". I mean, I would have just said it was orange, is there another one out there with dark orange?

Whenever I eat something flavoured like honeycomb, I'm always expecting some kind of crunch, you know, like a Crunchie. Sadly, there's none of that here, but I can't mark it down too much because that's just my unrealistic expectations. I can mark it down for its somewhat sickly filling though. It tastes a bit like honeycomb, sure, but it's a bit too overwhelming and not entirely authentic. The sponge is alright, doesn't really have an overall bearing on the flavour, but it's there. When all is said and done (or eaten and done), I'm just left with a sort of sickly sweet aftertaste that's reminiscent of honey. It's an alright experience while chowing down, but I won't rank it highly against other, more balanced Mini Rolls. The back of this pack says there's also a hazelnut variety out, so I guess my next mission is to hunt that down. Hopefully that will be nicer.