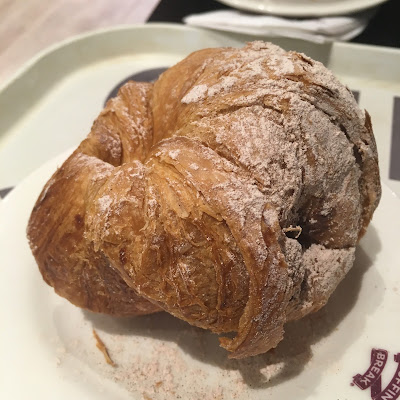 I thought the crossover baked goods fad was dying out, but fortunately there's still some life in it. I popped into Muffin Break today and found their latest offering, the Duffin. It's a doughnut crossed with a muffin! With chocolate hazelnut inside! Now, this isn't the first Duffin by a long shot. Starbucks had one back in 2013, while Tesco came out with theirs in 2014. Wow, look at that, I've been around long enough to refer to myself for a brief history of snack foods. But I digress, let's see how this Duffin stacks up.

I'll start by saying I really liked this, but there is one gripe I had with it. This isn't a duffin. The muffin element is present, sure, but it doesn't seem to contain anything doughnut like, instead it has the consistency of a croissant. So why not call it a Croiffin? It's a flaky, pastry like outer, with a denser, cake-like inside that's full to the brim with chocolate hazelnut goodness. It's soft, sweet, chocolatey, just all round delicious, with a generous dusting of icing sugar that rounds off the sweetness. So yeah, it's pretty perfect, but it's not a duffin. So head over to Muffin Break for your misnamed Croiffin fix, before they disappear.