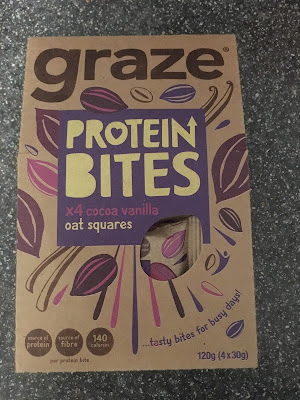 Graze has been around for a long while now. I keep getting tempted by those free box offers, until I realise I already had one like five years ago. I remember it having some tasty stuff, but I guess the Graze empire has grown substantially, because now they have a presence on the supermarket shelves. More snacks is never a bad thing, especially when they promise vanilla and cocoa oat squares like these ones. They're called Protein Bites, because it has extra protein chucked in there, amongst the oats and seeds.

I have to say, these are pretty small, but what more can you expect from a chocolate flapjack that's only 140 calories? Alright, it's not quite as unhealthy as a chocolate flapjack. It actually tastes pretty clean, not greasy at all, but it has enough flavour to make it a worthwhile sweet treat. The oats are quite tightly packed, with the seeds adding a bit of variety to the texture. The cocoa and vanilla are both easily identifiable, and add a certain creaminess to the mix. The squares are a little dry, but it doesn't become much of a problem because of their size. Not sure if that's entirely a good thing though. These are pretty good, great for a little snack, or for a small breakfast on the go. I'm tempted to get some more.