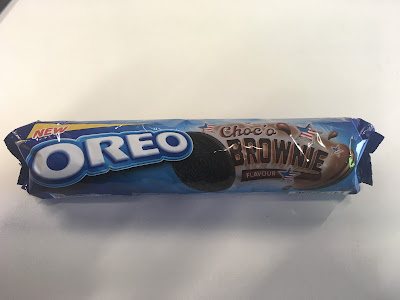 We haven't seen a new Oreo flavour in a little while, so I was pretty eager to track these down when I heard of them. Thankfully I found them in Asda. These are the Choc'o Brownie Oreos, which were apparently the result of a new flavour poll. Why this won over such suggestions as apple cinnamon oatmeal, when there's already a chocolate flavour available, is beyond me. But hey, brownies make chocolate better, so I was hoping they'd be something special.

Well, these are good, but I don't see how they're all that different from the regular chocolate Oreos. I guess they're a bit darker in taste, it's a smooth creme filling that has a certain hint of brownie about it, but it seems the difference isn't all that great. The darker chocolate flavour works well with the biscuit, it gives that overall dense taste experience, so this is a pretty good addition to the range. It's just a shame none of the more creative Oreos are hitting the shelves.