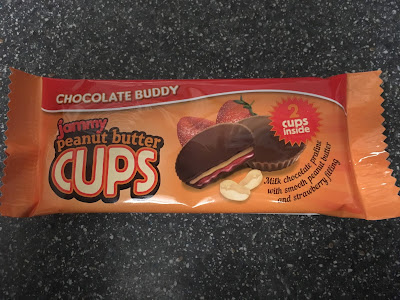 I reviewed the Chocolate Buddy Peanut Butter Cups a while back, which were pretty good for an off-brand peanut butter snack. In the comments I was informed of the existence of a peanut butter and jelly version, and I've finally managed to track it down. The packet says "jam" instead of "jelly", but I don't have time to go into the differences between the two, so let's just say it's a mixture of smooth peanut butter and strawberry flavour filling in a chocolate cup.

There's some pretty decent peanut butter in here, encased in some good quality chocolate. But I've covered those before, so I'll focus on the addition of the strawberry, which unfortunately doesn't make them any better. It's a smooth, somewhat fruity, American jelly-like filling, and while it blends alright with the peanut butter, throwing the chocolate on top makes it all a bit too sweet. It's a decent enough effort, not awful by any means, these are just a nice different idea that just isn't executed all that well. Worth a try just for the experience, but Reese's are still the king of the peanut butter cup.