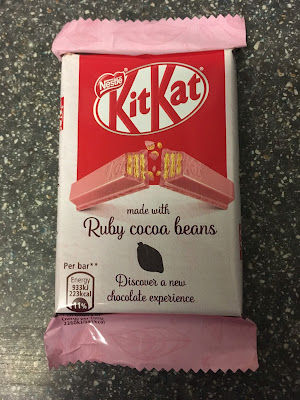 There's a new kind of chocolate in town. Forget milk, white and dark, now you can get ruby. This chocolate news has crept up on me, I knew nothing about it until last week, though it seems it's hit the market pretty quickly from being announced last year. The best thing is it's not purely available as an expensive artisinal chocolate bar, you can find it in Kit Kat form at your local Tesco.

So what is ruby cocoa? Well, I'm not sure, and it seems the properties of it are a trade secret, so let's just say it makes pink chocolate. You may think it's just an aesthetic difference, but let me tell you this stuff tastes different. I would say it's more comparable to white chocolate than anything else, but there's a certain flavour to it. It's a bit fruity, and there's a little something that to me is reminiscent of flowers. I think it's an acquired taste, and it will probably take me a few tries to get used to it, but my first impression is that it's a little, how should I say, perfume like in taste. It's not bad though, it has a lovely creamy texture, and it's close enough to white chocolate for me to enjoy it, I'm just not sure about the overall flavour. I'll need to buy more to experiment.