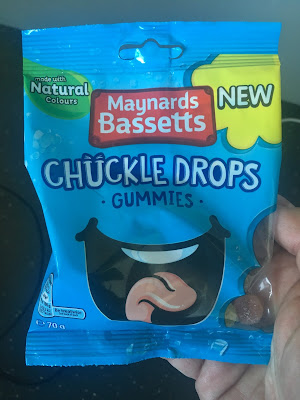 Yeah, Chuckle Drops. I don't know why, but that doesn't sound particularly appetising. I think I'm picturing that wide, guffawing mouth flecking out lumps of spit, which could easily be branded "chuckle drops". But actually, these are perfectly harmless jelly sweets in various flavours. Basically they're like big Jelly Tots, except for some reason they've dropped the purple and added in white. White isn't even a flavour! Not sure what they were going for, I guess pineapple or something that's clearly not as good as blackcurrant.

But hey, these aren't too bad. The fruit flavours are bold enough, some are a bit hit and miss but the red and orange ones are nice. I think they're just a bit too big for my liking. They're overly chewy, and by the time I made my way through them the flavour was waning, unlike Jelly Tots which seem to have the perfect combination of size and flavour. They're just a bit of a cheap knock off really, not bad on its own, but paling in comparison to the classic sweets. Worth a try at least.