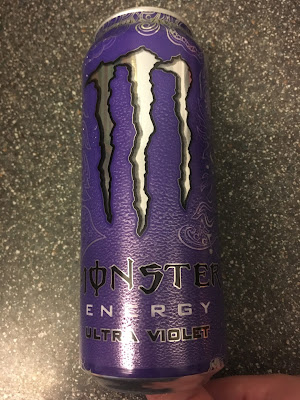 Oooh, another new Monster flavour. I'm glad I managed to snag one, because I had trouble seeing it at first. Get it? Because it's Ultra Violet? Hahahaha! Anyhoo, this is another addition to the Ultra range, which I have thus far thoroughly enjoyed. This one is violet, and in true Monster fashion the name and description hold no clues as to what flavour it's supposed to be. The blurb is a ramble about 70s psychedelia and apparel, while also saying it's "pixie dust" flavour, which is entirely unhelpful. But as they say, the proof of the energy drink is in the tasting, or something like that.

Well, it tastes purple, which as you may know equates to something like that artificial American grape flavouring. So basically it's a zero calorie grape flavoured energy drink. It's a little odd, normally I expect that grape taste to be coupled with a sickly thickness, but here it's somewhat light. It's not a particularly great flavour, kind of artificial and vaguely fruity, but it's refreshing enough. Definitely at the bottom of my list of Ultra flavours, but it could be a lot worse.