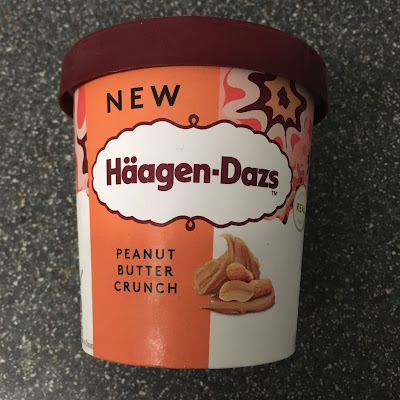 I'll start by saying this is perhaps a bit too much peanut. I know I should've expected that from the flavour, but other peanut butter ice creams I've tried usually have a little something to break it all up, like a bit of chocolate. It's a minor gripe though, as this is some great quality stuff. The ice cream itself has a creamy, smooth, somewhat muted peanut butter flavours, with a generous smattering of sweet peanut pieces that add a satisfying crunch and another burst of natural peanut flavour. My favourite part, though, is the swirl. While most would settle for a somewhat sickly sauce, this is a thick swirl of proper peanut butter, running through the entire tub and raising the whole experience to another level. It's like eating peanut butter from the jar, but not as bad for you. A great Häagen-Dazs tub that may be a bit overly peanut buttery, but tastes great.