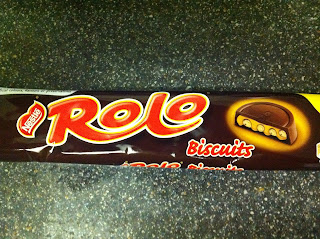 Holy crap! New things! Following Cadbury's attempt at turning their chocolate bars into biscuits, Nestlé are stepping up their game and doing the exact same thing. Well, sort of.

The first thing you notice when unwrapping this pack is that each biscuit is individually wrapped. You're bound to notice it because it's the first thing you see. But once the secondary wrapper is open you're treated to what looks like a giant Rolo. 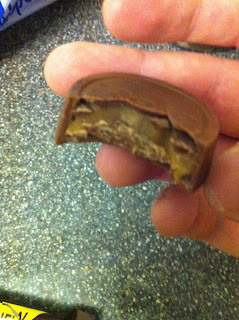 Oh wait, it is a giant Rolo! Turns out the amount of biscuit shown on the packet is quite exaggerated. There is certainly biscuit in there, but it's overshadowed by the vast amount of caramel afforded by the expanded cavity. Sure, there's more chocolate as well, but because the whole thing's flatter the ratios are a bit off. There's just a bit too much caramel, and the whole thing just tastes a little too syrupy and sickly. Still, it all tastes nice, but if you're expecting it to be like a normal Rolo with some biscuit thrown in, prepare to be disappointed.