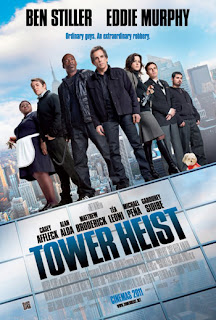 I don't particularly like Ben Stiller or Eddie Murphy, they've turned out some pretty shitty stuff over the years. But I was willing to give this one a go, 'cause it's about a heist. Also a tower.

Tower Heist follows the staff of an exclusive apartment complex in New York called The Tower. Ben Stiller plays Charlie, the manager of all the staff on call to make sure the occupants' needs are met. But when the millionaire owner of the penthouse gets arrested for fraudulent activities, the entire staff pension that he promised to invest for them is gone. Desperate for their money back, and revenge, Charlie and a few other members of staff hatch a plan to break into the penthouse suite and locate the rich guy's safety net cash reserve.

It's an original enough plot, and I actually quite enjoyed watching it unfold. The comedy throughout this movie is not as outlandish as Murphy and Stiller's regular efforts, and it fits quite nicely in with the story, toning down the outright laughs to make sure the robbery element gets enough focus. Stiller and Murphy themselves are pretty good, they didn't annoy me one bit during the movie, and that's quite rare these days.

The only real problem is the ending. I'm not going to spoil anything, except to say I was disappointed. There is a build up and a certain plan of action going on throughout the movie, but the final events leave everything half-assedly resolved and full of plot holes. It's like queuing up for a long time to get on an awesome rollercoaster, but at the last minute you're diverted into a small room where a fat guy shits in your mouth. I can definitely say I was enjoying Tower Heist, and it's certainly not an awful film, but the last act really soured my opinion of the movie over all. Still, good effort, better luck next time.