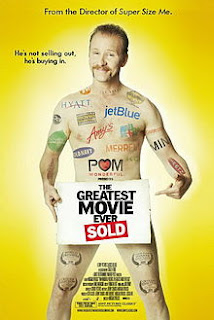 Remember that guy who stuffed his face with McDonald's for ages? Well, he's back, with a new documentary about product placement.

Yes, I'm sure we all know about product placement, but Morgan Spurlock is on a mission to find out exactly how it all works. Of course, to make the movie, he's going to need some money, so Spurlock approaches several brand name companies to ask if they'll endorse his documentary on product placement if he only uses their products during the movie. Yes, it's all very self aware and meta, but it actually gives Spurlock a very good insight into how the whole process works once he's snowed under with contracts and obliged to act in a certain way while filming.

We have interviews with the people who deal with placing the products, as well as those who are mostly against the idea. The Greatest Movie Ever Sold is a pretty balanced documentary. It doesn't seek to force an opinion on the viewer, perhaps due to the contracts that Spurlock had to sign with his funders, but instead seeks to inform the viewer as much as possible about how product placement really works, and where advertising may be going in the future.

The whole idea of the funding coming from brands is a pretty good one, but I can't help but feel it wasn't executed as nicely as it could've been. It seems like Spurlock was on a mission to make a statement of some kind, but nothing really results from his constant usage of certain products, or all the branding he does. Sure, it injects a bit of fun into the proceedings, but it all seems a little bit pointless in the end.

Still, I enjoyed the movie. While it certainly could have been put together better, The Greatest Movie Ever Sold is an informative and fun documentary.