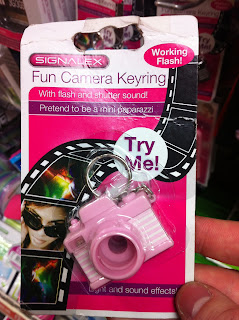 Just look at that. Isn't it great? While I do quite like some of the stuff Poundland chucks into its technology section, this one is just a monstrosity.

It's a little plastic camera, that goes on your keys. Does it actually take pictures? No. But it has a "working flash", which in this case means that it just lights up for a second when you press the button. It would be great for the unfortunate protagonist to have in a horror movie where there are monsters lurking in the darkness, but apart from that, utterly useless. Also, when you press the button, it doesn't sound like a camera shutter as it does a small animal trapped inside being crushed by your actions.

The very motivation behind this keychain is sketchy at best, its main selling point seems to be that you can pretend to be a "mini paparazzi", ignoring the fact that, not only is the singular form "paparazzo", but also that "paparazzo" is one of the most hated job titles in the entire world. At least warlords can be quite charismatic. But how does this make you a mini paparazzo? If anything it would make you a regular sized paparazzo with a tiny toy camera. Would you dare to point it in the face of a celebrity? No.

The fact that this idea was thought up by someone, and proposed to someone else, who then accepted it and put it into production, raises some serious questions about the people working under the Signalex brand. Who would want this? The desired demographic seems to be young girls, but there is a blue version for the boys who want to have this annoying piece of machinery dangling from their keys.