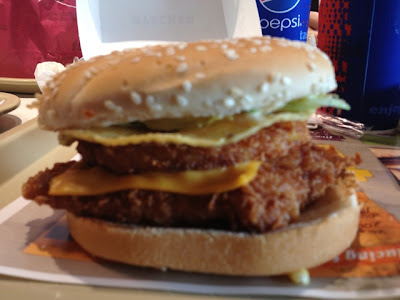 It was just another day at KFC HQ. Security guarding the secret recipe stronghold, people are talking casually about fries (probably)...


All of a sudden, The Colonel's voice calls over the tannoy. "Dad gum, chickeneers, we done need a new burger! I want it on my desk in five minutes!" The employees look around like nervous meerkats, and one drops a taco shell into his tower burger. "That'll do", he sighs, dejectedly.

That's probably how it happened, because this burger is a regular tower burger with a massive nacho in the middle. That is literally it, there's nothing more I can say about it. The nacho is just like a nacho. Salted, crunchy. It certainly adds an interesting texture to the burger, but its nothing to write home about. Sure, it's still nice, but this variation is pretty bland and unoriginal.