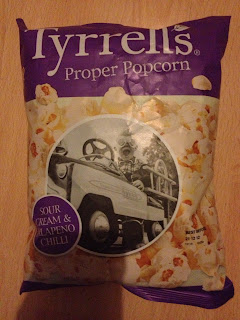 Yeah, that's right, sour cream and chilli popcorn. The mere thought of it is probably enough to distract the standard salt and sweet guzzlers, but don't be so quick to dismiss it. After all, it's abstract thinking like this that brought us bacon popcorn, even though that was pretty gross.

I must say I approached this bag with apprehension. But I pressed onward, because trying new things can sometimes yield pleasing results. Sometimes horrifying ones too, but we do not speak of them. It takes a few kernels to get used to. It's not so much the flavour itself, or the popcorn, it's the combination of the two that's a little unsettling. You're expecting a regular popcorn flavour to go with the soft, bumpy kernels, or a far more crunchy experience to accompany the sour cream and chilli flavour. But once I got used to it, I enjoyed this popcorn. The flavouring is quite liberally applied, a nice creamy taste with a spicy kick. While I did get used to the texture, it did still feel like I was eating some mushy crisps.

This popcorn is an interesting effort from Tyrrell's, and it's quite tasty once you get over any preconceptions you may have about popcorn. But I definitely prefer sweet popcorn to savoury.