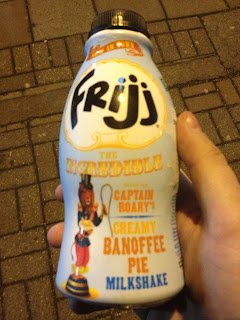 I try to say I dislike bananas, but they're so damn versatile they're hard to ignore. A banana on its own, or clogging up my smoothies, sure, I hate that. But give me a slice of banana bread of banoffee pie and I'll forgive bananas for all their previous trespasses. So this banoffee flavoured milkshake was a bit of a risky try, seeing as I like banoffee but hate banana flavoured drinks.

Well, it's certainly nice and creamy, which I've come to expect from Frijj's shakes. The flavour is... distinctly banana. Sure, you can taste the hint of toffee in there, and I guess pie? But it's mostly banana. While in a normal situation I'd probably say it's not nice, the hint of toffee, the quality of the shake itself, or both, seem to have made this turn out alright. Sure, I'd probably choose any other flavour given the choice, but this is not a bad shake, especially if you go bananas for bananas.