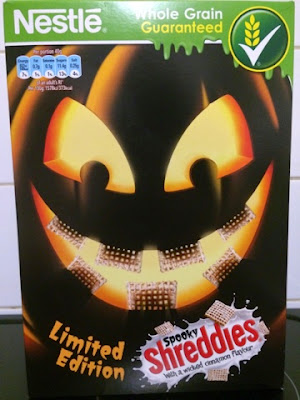 Halloween is just around the corner, and there are finally some good seasonal goodies lining the shelves. Granted, one of them is the Halloween edition M&Ms, which are the same old thing but in different colours. But there are also some mighty interesting offerings, like these "Spooky Shreddies", which are, quite simply, cinnamon flavoured Shreddies. A good choice for Halloween (aside from pumpkin of course), but my relationship with cinnamon cereal is somewhat strained, as detailed in as far back as my second ever review. But cinnamon and I have started to become allies, so I was willing to give these a shot.

There's not much to say about these, to be honest. They are cinnamon flavoured Shreddies, and they taste like cinnamon. At first I was quite put off by the spiciness, being used to purely sweet varieties for so long. But as I continued through the bowl, I actually found them to be quite alright. The spice is not too overwhelming, but it's definitely flavoursome. It provides a nice sweetness that blends in with the Shreddies quite well, but the spiciness still put me off a bit until the end of the bowl.  Certainly not the best flavour by any stretch of the imagination, but that's probably my adversity to cinnamon talking. These Spooky Shreddies are a neat idea, and cinnamon lovers will certainly have a good time. They're just not quite for me.