I took my driving theory test today. I guess I'm a little late to do so, considering my age, but hey, I'm getting there now. Prior to the test itself, I, of course, practiced both the multiple choice and hazard perception parts using a couple of resources. Hazard perception is a bit of a tricky beast, being presented with real life road situations, during which you have to click during a very specific window of time to show you pay attention while you're driving. The ones I practiced were fine, they gave me a feel of what to expect in the test proper. Or so I thought. Apparently those real life videos have been pushed aside to make way for some fancy computer generated situations. 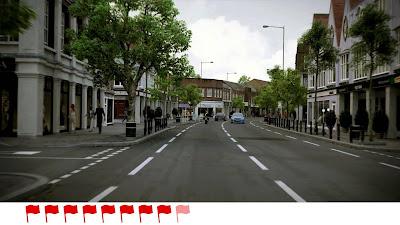 I clicked through to the hazard perception part of the test, and found myself transported to a different world for the next 20 minutes or so. A world in which I sat in a self-driving car, coasting down the streets and country roads of a world that looked like my own, but which didn't feel the same. Houses lined the streets, but they just seemed... off. It was daytime, but the curtains were all drawn, or simply greyed out. Trees stood in rows, but strangely devoid of any movement, any rustling of the leaves. It was like a sort of dystopian near future, everything in neat little rows, but something was slightly amiss. But let me tell you about the people.

Oh yes, the people. This is hazard perception after all, and all hazards involve people, because people are awful. So, of course, there were people dotted around this alternate reality I found myself in. They had all the right features, but also a strange, glossy sheen. They walked, but uniformly, and without any sense of character, their faces expressionless. A rubbish truck came around the corner, manned by twin men staring blankly at the road ahead Like sentient androids, these "people" carried out their daily routines, and sometimes darted in front of my car, I guess technology can't fix everything. All I could do was watch, from my little, presumably car-shaped, box, being transported though this unsettling world, my only input being a single button. I was told to push it only when I saw a developing hazard, but the overall feel of this reality was that it was, as a whole, a hazard waiting to happen. Or perhaps the hazard had already passed, and this was the result, like the Matrix.

After being transported through several unsettling scenarios, I was instructed to leave the room, and I emerged, blinking, into the sunlight, into a world with sounds and movement, clutching my certificate to my body with apprehension. Will our world one day become flat and emotionless, like the theory test suggests? Or were these scenarios created just to pinpoint hazards, so they don't have to make people drive around for ages? Probably the latter, all I know is that as I walked home, my movements felt a little too robotic.

Don't even get me started on the sheep, those things looked ridiculous.