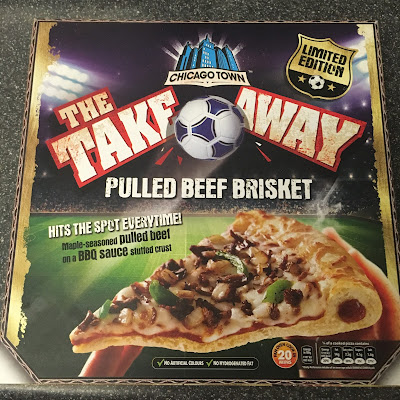 I don't normally buy frozen pizzas, but when one offers me a BBQ sauce stuffed crust and pulled beef brisket on top, as well as being on offer, that's one I'll be sticking in my oven. So yeah, apart from the beef and the stuffed crust, there are also peppers and onions, and cheese. Pizzas need cheese. Not sure why the football is emblazoned on the box, takeaways aren't just for football fans.

As much as I was looking forward to this pizza, overall it's very average. You may wonder what I expected from a frozen pizza, but it did promise some good stuff. The maple seasoned pulled beef was, well, some pretty okay beef. It's a nice topping, but not exactly gourmet. The vegetables are just vegetables, nothing special, though they do distract from the flavour of the beef a little, which isn't fantastic. The crust is pretty good, substantial and soft, and the BBQ sauce stuffing is a nice touch, combining well with the dough, even if it is perhaps a little too tangy. This may be better than many frozen pizzas I've tried, but it's not a fantastic offering.