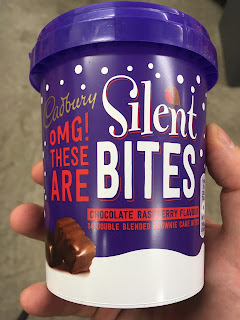 Just as I was giving up hope of seeing another new Christmas themed product, I stumbled upon this tub of Silent Bites in my local Co-Op. A festive take on the previously released Amaze Bites, these are chocolate brownie bites with a chocolate raspberry flavour. Now, I wouldn't particularly call raspberry a Christmassy flavour, but they've already used orange and mint, so what else could they do? 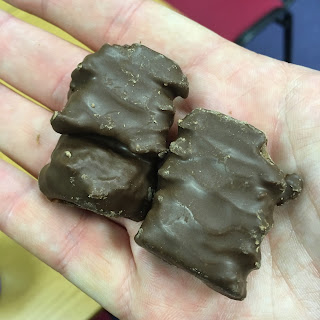 I'm not sure if these were meant to be somewhat shaped like Christmas trees, or if the machine is just pumping them out in very non-uniform shapes. Either way, these probably don't look like they're supposed to. But hey, it's a lump of chocolate coated brownie, so it doesn't really matter what it looks like as long as it tastes good. Thankfully, these are pretty nice. The brownie is the same quality as you'd find in the Amaze Bites, a nice thick, chocolatey offering that does get a little sickly, but maybe eating the whole tub in one sitting isn't a great idea anyway. The raspberry flavouring isn't especially authentic, but there's a nice fruity hint to these that definitely has something of a raspberry taste. It's not too sickly sweet, but it does permeate through the whole brownie, and doesn't really detract from the chocolate experience. This is another pretty good flavour for the range, but it looks like it will only be around for Christmas, so it's worth tracking these down.