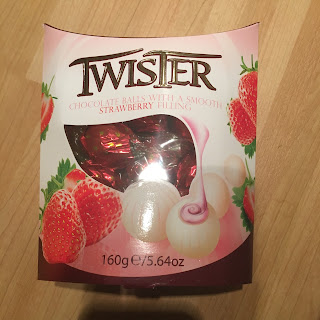 It's nice to check out Poundland every once in a while to see if anything new has popped up. I didn't find anything lining the shelves, but near the till was a stack of boxes of Twister, which turned out to be different varieties of filled chocolate balls. Think like Lindor, except, you know, it only costs a pound. I guess that should have been some indication of the quality, but I figured I'd give these a go. They had a few flavours on offer, including praline, but I went for this white chocolate and strawberry combo because, I don't know, maybe I'm longing for summer.

You know what, these aren't bad. I mean, they're not particularly good, but they're not bad. The chocolate isn't of the greatest quality, but it's hard to get white chocolate right, and it does a decent enough job. A little chalky, but the creaminess is good enough. The filling is actually fairly nice. There's a little too much of it, which makes it overly sweet overall. but the strawberry flavour is bold, if a little artificial. The texture could use a bit of work, it's fairly smooth, but it's a little too thick, it has something of a moussey hint to it which isn't particularly great. So yeah, definitely not a direct competitor to Lindor, but for £1 this isn't an awful box of chocolates. I'll probably try out some of the other flavours soon enough.