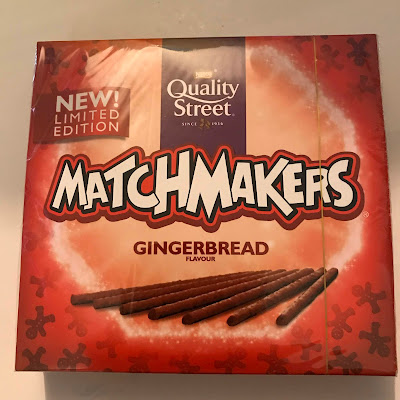 It's September, so you know what that means. Yeah, it's Christmas! So cast aside those "it's too early" naysayers, and check out some of the new stuff starting to fill the shelves. Like these gingerbread Matchmakers. Last year saw the introduction of the excellent salted caramel flavour, so I was worried these wouldn't quite live up to those lofty heights. I was expecting something unpleasantly spicy, but instead I was pleasantly surprised. The ginger is mild, but has a nice impact on the flavour. Creamy chocolate with a nice little hint of spice, that builds up to a nice point but doesn't overwhelm too much. Eating a whole box full would probably get a bit too much (not that I'd know anything about that), but for a little Christmas sharing snack, these are sweet and warming. Not quite as good as the salted caramel, but another great effort.