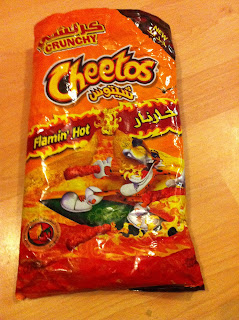 Ah, Cheetos. Favourite snack of American geeks. They have become known for the inability to stop once you start eating a packet, and the yellowy dust residue that they leave on your fingers. Sadly, Cheetos only had a brief appearance in the UK, with the sale of "Dangerously Cheezy" Cheetos in the early 2000s. But now they are nowhere to be seen. Imagine my delight at visiting Oman and seeing a wide variety of Cheetos on offer.
The average Cheeto is fine, but pretty much like the Wotsits I can get at home, only larger. They're good, but nowhere near as good a Crunchy Cheetos. These are nobbly sticks of cheesy goodness, and once I had a taste I was in love. Sadly, I was also tempted to pick up the Flamin' Hot variety. Note that these are manufactured in the Middle East, and when they say something is hot, they mean it. Not that these are off the scale, but they're a lot hotter than the average pussily-labelled "hot" snack. My memories of them were not too great, and while there were regular Crunchy Cheetos to scarf I was happy leaving them well enough alone.
On my most recent visit I found a new flavour, Cheddar Jalapeño Cheetos. They blew me away. They were as good as Crunchy Cheetos, but with a really nice spicy kick that was totally awesome. Since I am now back in this country, and my mother offered to bring me back some food, I asked for a couple of bags of Cheddar Jalapeño. Instead she brought me Flamin' Hot. Makes sense.
Naturally I was disappointed. These Cheetos are pretty hot, it's probably wise not to eat a whole bag in one sitting, because your mouth would be on fire and your stomach would cry. But, with a significant lack of any other form of Cheeto, I tucked in. 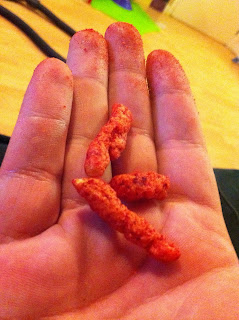 Yeah, they're pretty much bright red. They look redder in real life. Also, if you direct your attention to the top of the picture, you can see the sandy deposits of aforementioned Cheeto dust. It's best to save this until you have finished eating your portion, because licking that dust off your fingers is the shiznit. The dust in Flamin' Hot Cheetos, however, is slightly evil. It makes your fingers red. It seeps into any cracks in your lips and turns them red. But as a seasoned geek I can just shrug and say "I was eatin' Cheetos" and no one thinks any less of me than they did before.
Thankfully, my previous memories of Flamin' Hot Cheetos were not affirmed here. I found myself devouring quite a few in one sitting. Sure, they're not as good as the other Crunchy Cheeto varieties, but they still taste good. If you're not one to handle your spicy foods, it's probably best to stay away and seek out something milder. I have a strong stomach for spiciness though, which I probably mostly inherited from my dad, he eats chillies like a fiend. So don't be dissuaded by the hotness. It's quite satisfying, and these Cheetos are still really moreish. Just not so much as others.
My rating: 3/5
Posted by Dan Bishop at 16:19