I am a man who appreciates a good dip, but Doritos have only ever served up two types. There's the generic salsa, in hot and mild varieties, and the sour cream and chive. I'll eat salsa occasionally, but it doesn't really do much for me. Sour cream, on the other hand, is awesome, I could eat that all day.

But what of the other dips out in the big bright world? I've dabbled in hummus, guacamole, and various others, and when I went to America last I decided to go for the salsa con queso, or chili cheese. Cheese is invariably awesome, so to have it melted with chili and put on things was a dream come true. But the dip I tried out there left a lot to be desired. It was a bit too creamy, and the heat was a bit off-putting. Not that it was too hot, it just didn't feel right. Upon returning to the UK I noticed that Tesco have ventured into this territory with their nacho chili cheese dip, which tastes awesome. However, after a while it does start to be a bit uncomfortably spicy, and the little pieces of nacho inside are a bit weird, feels like you're getting sloppy seconds from a double dipper.

But now Doritos have stepped up to the plate: 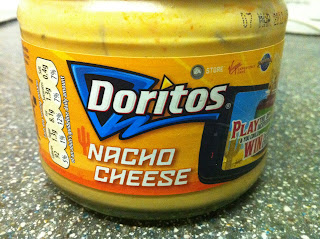 It's Nacho Cheese time, bitches. I know this has been out a while, but I was apprehensive of buying it, because Doritos dips are expensive, man, pretty much the price of the chips themselves. But now they are 2 for £2, so I couldn't resist any longer.

I didn't buy any Doritos chips to go with them, because aside from Chili Heatwave, which just taste awesome, the only reason I buy tortilla chips is to get dip from the jar and into my face. So I opted for the cheaper Tesco versions, which are just as good at transporting dip.

The first thing I noticed was the difference between this dip and the Tesco variety: 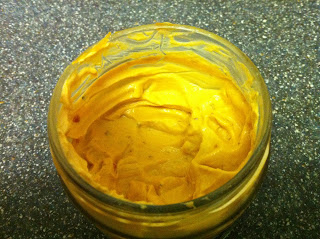 Smooth man, real smooth. No chunks, no discolouration, just pure melted chili cheese goodness. It did remind me of the disappointing American style though, but my fears were put to rest as I began to dip.

It's a real creamy experience. The cheesiness is spot on, and not over-empowering, and there's just the right amount of spice to keep it interesting without taking over your taste buds. Why did I ever doubt you, Doritos? Clearly you have taken so long filling this gap in your market so you can perfect the recipe. After devouring over half the jar, as seen above, I can safely say that this is one of my new favourite dips, not quite taking over the sour cream, but it's close. Whenever I want something spicy and my budget allows for it, Doritos Nacho Cheese will be heartily funneled into my mouth.