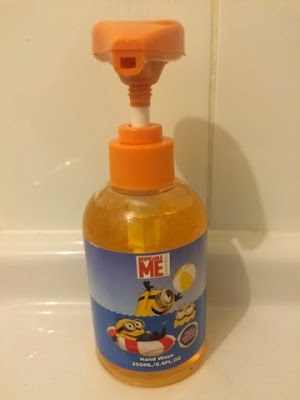 Tesco recently offered to send me some kids toiletries to try out. At first I thought they were just regular old toiletries with kid friendly stuff printed on, but it turns out a couple of the products have a neat little twist. This Despicable Me handwash was the first one I opened. On the surface it looks like a pretty shameless tie in to the movies, with the bottle stained yellow appropriately. But it turns out when you push the handle down, you're treated to various soundbites of Minion chatter.

Sounds pretty neat, right? The kids love it at least. But of course, it serves a double purpose. If there's one thing kids inexplicably don't like doing, it's washing their hands after going to the toilet. So if the pump on their soap starts babbling noises from their favourite movie mascot, they're more likely to want to use the soap. Also, if the thing doesn't sound off, you know that your kids are skimping on their hygiene duties. So really, it's a very nifty idea that I'm surprised I haven't seen before.

That's not to say there aren't downsides to this. First off, the soap inside isn't anything particularly special. It's soap, sure, it does the job, but they could have at least given it a nice scent. That's not too big a gripe though. While the noise on the pump is a pretty good idea, it does tend to go on for a long while, probably topping 10 seconds until the Minions shut up. That's fine during the day, but having your kid set this off at 3am can make for something of a rude awakening. Also, it's not just pushing the pump that can set off the giggles. Even the smallest vibration around the bottle can set it off, so as much as putting another toiletry next to it can treat you to a healthy dose of Minion noise.

So yes, this is a great idea for a hand soap. It's just not quite pulled off in the right way. I was thinking how I could easily refill this bottle with more soap once the original stuff is gone, but at the rate it's set off, and the length it goes on for, I'll be surprised if the battery lasts that long. But hey, the kids will certainly enjoy it while it lasts. So if you think this would be good for your kids, or if you're a big kid yourself, you can pick up a bottle at Tesco for £2.