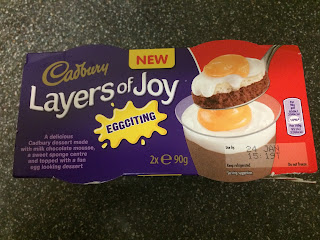 I thought I'd made my way through all the new Easter products already, but I stumbled upon another one the other day. These are Creme Egg Layers Of Joy, an apparently "eggciting" dessert. It seems quite a bit like the Creme Egg Pots Of Joy that I reviewed last year, but there are some noticeable differences. First of all, there's a nice big sponge disc slapped in the middle, and the stuff underneath is a chocolate mousse rather than the melted chocolate of the previous dessert. As far as I know, the stuff on top is still the same, but the specifics of it aren't mentioned in the description, they instead decided to call it a "fun egg looking dessert". Very helpful.

I don't know if I'd call the egg looking stuff particularly fun. It does have something of a fondant texture to it, and there is a slight hint of a Creme Egg flavour to it, but it didn't exactly bring memories of the real thing flooding into my head. It's nice, sweet and creamy, but not a great emulation. The sponge disc in the middle provides a difference in texture, but not much else. It's a plain sponge, not even chocolate, and it's a little dry. I wouldn't say it ruins the pot, but it doesn't add anything of importance. The mousse underneath is good, a nice chocolatey offering that takes up the majority of the pot, but it doesn't beat the fantastic creaminess of the melted chocolate found in the Pots Of Joy. So all in all, this is a pretty average dessert. I wouldn't call it bad, but it's not particularly interesting, and it doesn't taste all that much of Creme Egg. You're better off buying the real thing.