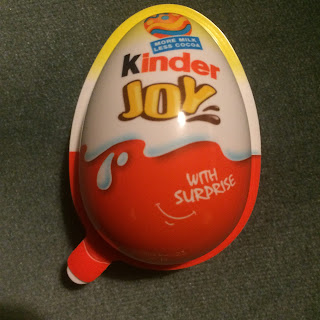 After seeing these reviewed on both Grocery Gems and Reaching For Refreshment, I made it a personal mission to pop into every Co Op I could find to pick up some of these Kinder Joy eggs. Thankfully I only had to go into two, but I would have tried more. We all know the joy of a Kinder Surprise, a lovely chocolate shell with a funky little toy inside. But now you can know the surprise of a Kinder Joy, which has the same principle but in a different form. Observe. 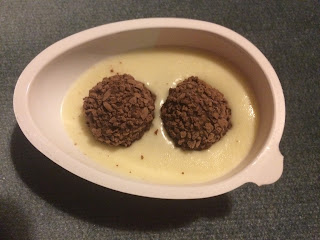 Yes, this egg splits in two, and shows one half is filled with some chocolatey, crispy balls embedded in some nice looking creamy stuff, while the other half contains the funky little toy. I guess that removes the danger of choking that has seen Kinder Surprise banned in America. I was hoping for a cool toy, but instead I got these rings: 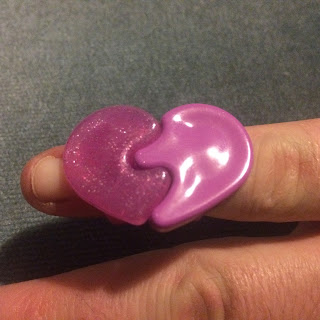 I assume you're meant to give one to a friend, and you're meant to bring them together in a sort of heart necklace sort of situation, but due to the orientation of the rings I can't figure out how two people wearing them could effectively put the shape together. This toy makes no sense, I want a car or something. But I can't hold that against Kinder too much, we all know the toy is the luck of the draw. What isn't is the stuff in the other half of the egg, so how does that taste?

It's actually pretty damn good. The two balls consist of a nice crunchy wafer with a nice texture on the outside. The insides consist of a chocolate cream, which is very nice and sweet, but overall they're quite small and not all that satisfying. Thankfully the stuff they're swimming in is pretty great. It's a mix of milky and cocoa cream, it's quite thick and there's a fair amount of it. The combination of flavours does give it a taste similar to that of the hazelnut cream you'd find in a Kinder Bueno, but there is in fact no hazelnut in here. It's a good flavour, very sweet but not too sickly, and the amount of cream goes some way to make up for the shortfall left behind by the pretty tiny crispy balls. I wouldn't say I prefer these to Kinder Surprise, but it's certainly something different that is worth a try.