In an episode of Friends, Joey offers his friends the bucket of chicken he has because he's eaten all the skin and doesn't want anything else. In an episode of South Park Cartman eats all the skin off a bucket of KFC, and the other guys are so pissed off with him they get the whole town to ignore him. And everyone agrees. Two episodes of different shows, all with the same message. It's all about the skin. And they're goddamn right, KFC is all about the skin. So what the fuck is this? 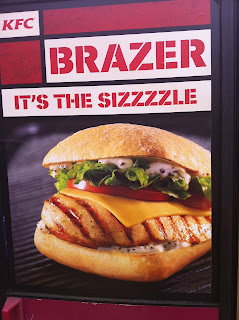 The Brazer?! It's the sizzzzle?! First of all, where's the skin? Secondly, how is KFC chicken with no skin worthy of three extra "z"s? Thirdly, WHERE'S THE SKIN! The restaurant is called Kentucky Fried Chicken, not British Misguidedly Griddled Chicken.
I knew it was going to be shit from the moment I saw it advertised. You know what KFC is without the skin? Just chicken. You know where you can get just chicken? Everywhere. But ever the responsible reviewer, I had to try it. For all I know they could've shoved the herbs and spices inside as a nice "Surprise! It's just as unhealthy as before. Fooled you, fatties!" 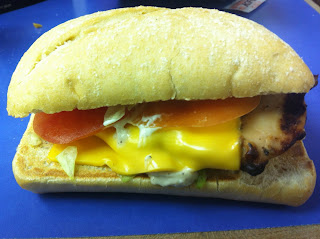 Uh, there's chicken in there somewhere, I promise. I know no food looks like the picture, but this is pretty easy to rectify. The tomato is too small, as is the cheese and the chicken. You know how to solve that problem? Make the bun smaller. Then you could have all that stuff seemingly bursting out. Who likes the bread anyway? Sandwiches were invented just to hold different meats and cheeses together. Don't try to fool me with this fancy bread either. Many have tried and failed. You wanna skimp on that awesome chicken skin and try and compensate with fancy bread? Not gonna fly with me.
But, you know, it's the sizzzzle. I assume that means "It's the sizzzzle that counts". But my burger was not sizzling when it arrived, not like the skillets I have experienced at Chiquito and Denny's (a transatlantic reference for you there), but that's okay, I don't like my burgers to be hotter than the surface of the sun when I eat them. But at no point during the construction process did I hear sizzling. I assume it was just taken out of some plastic wrap and put in the microwave. Come to think of it, even the advert picture looks like the pre-griddled chicken I can pick up in the supermarket for £1 a box.
What about the taste? There's really nothing to say. It just tastes like chicken. Because it is just chicken. I can see what KFC are trying to do, appealing to the healthy eating crowd and all, but as far as I'm concerned, they're not welcome in this establishment, and they should leave me to my greasy chicken bucket with the most lip-smackingly awesome blend of herbs and spices in the world. You may sneer as I wipe grease and crumbs from my chin, but I know you're just jealous. Just get back to your flat, tasteless chicken. Jerk.
My rating: 0/5
Posted by Dan Bishop at 15:57