If there's one thing kids like to do, it's to play with all of your expensive electronic equipment until it breaks. Well, I assume all kids like to do it, because mine love it. Since bearing children we have had two broken iPhones, two broken cameras, and a dead MacBook. Thankfully my iPhones were replaced via insurance and nice Geniuses, but my first MacBook died after a puke related incident, a week after my warranty expired. Boom, £800 for a new one. Which I then promptly dropped on its screen. Hence my current FrankenMac.

So my new MacBook has been slowly degrading since my son was born. Cracks are appearing, and the screen has gone a bit wonky. Until the other day when I entered the living room to find the MacBook on the floor with the screen half hanging off. I thought that was fantastic, because even if I wanted to get it fixed I couldn't close the screen properly to take it anywhere. So I took it upon myself to find the problem. 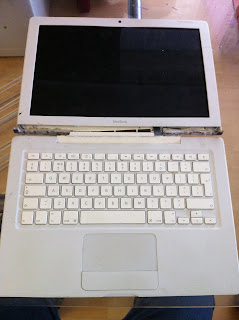 So after much unscrewing, and shards of plastic and metal falling out all over the place, I had managed to free the screen from the rest of the casing, and could identify the problem. Somehow the screen itself was still intact, but the hinges connecting it to the base had snapped, despite being made of metal. The plastic hinge cover had basically been destroyed too, meaning there wasn't much connecting the screen to the base at all. I briefly thought about taking it to an Apple store, before realising that they'd probably charge me hundreds of pounds for it. So off to eBay I went, and found the parts that I needed for £26. Two days later, they were delivered. Now the fiddly bit. 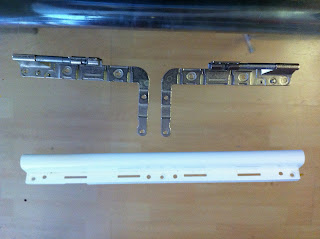 Mmm, shiny new parts. I thought it might be simple enough to replace the hinges, but they're rooted pretty deep inside the machine, so of course I had to disassemble the whole thing. I'd done it before with my completely busted MacBook, but this one is still working, so I had to trust myself to not break stuff while I was rooting around inside.
Having lost every precision screwdriver set I've ever owned, I had to root through around 15 random screwdrivers lying in my tool box in order to find one to take out the screws. There are a lot of screws. On the side, round the back, inside the battery compartment, inside the memory compartment. All quite small and fiddly. Since my kids were running around at the time, I for some reason thought it best to connect them all to a magnet that fell out while I was examining my screen, just so I didn't lose any. Because I'm a bit thick like that. 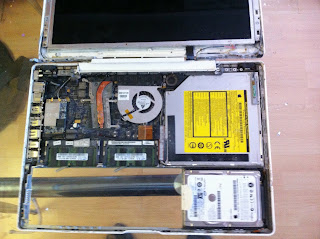 After much screwing and prying, the guts were revealed. Thankfully the keyboard disconnects very easily, and there's direct acces to most thing you need. Taking off the hinges was easy enough, but the problem came when putting in the new ones and working them around the wires leading into the screen itself, and the ones running to the camera and mic. But eventually I sorted it all out, screwed on the plastic cover and voila. 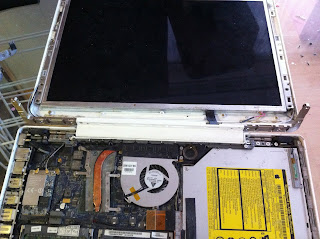 Look at those shiny new hinges. Of course, I still have to actually connect the screen back onto the base, but that was as simple as just sliding it on top of the hinges. 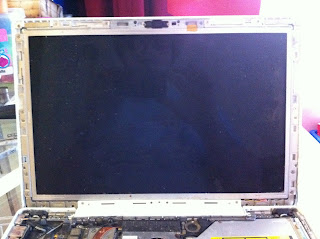 Hooray, it stands up again. My work here is done. Oh wait, the guts are still exposed and I have to screw all those infernal screws back in. But no biggie. Apart from I'm not sure which screws went where... 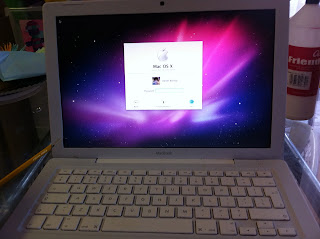 But I did it. And I didn't break anything. Except the keyboard and trackpad didn't work. Probably should have tested that before I put all the screws back in. But no problem, I'm like a pro now. So off came the casing, keyboard disconnected and reconnected, and all back together again. Like a boss. Except I have a few screws left over. I'm sure they're not important. I can hear the collective exasperated sigh of technical minded Mac people. Haters gonna hate.
My rating: 4/5
Posted by Dan Bishop at 01:48

Email ThisBlogThis!Share to TwitterShare to FacebookShare to Pinterest
Labels: Technology