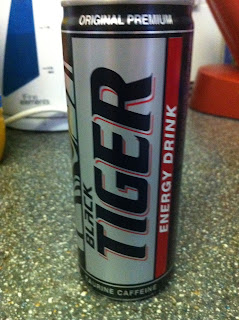 I went shopping earlier, and since I had nothing in mind to review today, I thought I'd pay a visit to the ethnic section. Well, it's less "ethnic" and more "efnic", as it pretty much only has stuff that's like things you can get elsewhere in store, but foreign. There's nothing outlandish, just enough for a pedant to classify it as "that efnic stuff". But enough of me being on a high horse, let's talk Black Tiger.

It's an energy drink. I didn't get it thinking it would be particularly different from any other energy drink, because they all taste the same. I got it 'cause the can looks pretty cool. It's black an it has a tiger on the other side, and that's cool. I guess it's called "Black Tiger" just for the edge that the colour gives it. Hell, I'd buy an energy drink called "Tiger", but I most definitely did buy one called "Black Tiger" 'Cause it's awesome. There is a slogan on it which states "Power is black", which I'm sure could have some racial connotations, but I won't be the first to suggest it.

My fears were dispelled when I visited the website though, where I was assured that Black is not only power, but it had no need to prove anything and it marks its territory with black. Glad that's cleared up. So, the guys who made this are really into black. If only the drink itself was black... 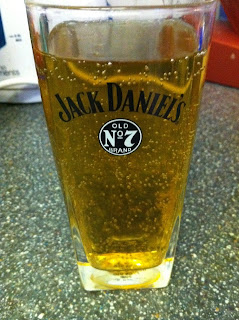 Bet you thought it would be for a second there. Well, no, because that would be weird. Instead it's one of those almost fluorescent colours that all energy drinks are. I don't see why, seeing as the primary ingredients are sugar and water, but hey, I guess that's just what energy looks like. As for the taste? Not much to say. It is pretty much like any other energy drink, probably along the same lines of Tesco's KX. So it's not bad, but it's not fantastic either. But it does get extra points for the can, and then loses them by saying weird things about the colour black.