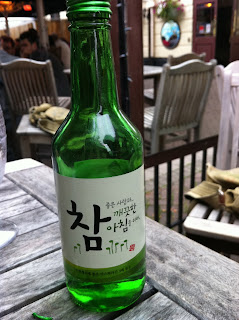 One of my friends returned from South Korea this week, so of course the customary thing to do was to meet up and go for some drinks. He'd brought a surprise home though, namely a bottle of Soju, an alcoholic beverage particularly popular in Korea. He also got me some Angry Birds socks, which is awesome, but I'm reviewing this thing right now.

Soju is basically like vodka. This particular kind was around 20% in volume, which Wikipedia ensures me is like most varieties. Koreans like to sweeten everything up though, so it's a much more pleasant experience than drinking straight vodka. Sure, you still get that telltale vodka burning sensation, but it's a much more mellow experience.

The real benefit is in the price. These bottles cost 1000 won each, which is around $1, or 60p. That's cheap even for a regular bottled drink, let alone stuff that makes you drunk. Hell, I briefly considered moving out there just so I could drink lots of this stuff, but then I realised that I'm not an alcoholic. Really, it's a good thing for me though, because for several years now I have stayed away from drinking due to the sheer cost and bad taste involved with drinking alcohol. Many people pride themselves on their ability to drink vast amounts of alcohol and not get wasted, but to me if you can get good and drunk for the cheapest possible price it's just good sense. Seeing as this stuff doesn't taste too bad and could easily take its toll on your body for just a few pounds, it's a big winner for me.

I don't know how I'd get on with drinking it in its native land though. There is a lot of etiquette involved in the drinking, it's a big tradition over there. We were taught a couple of drinking games involved with the bottle though, such as twisting the excess plastic away from the bottle cap and taking it in turns to try and flick it off. There's also a number just inside the cap that everyone has to try and guess. They're nice resourceful games to play, but it doesn't really matter who wins, because both the losers and winners end up drinking anyway.

Overall it was a nice little taste of the Korean lifestyle. I don't know much about the rest of it, but I know if I ever find myself stranded in Korea I can at least drown my sorrows for a very small amount of money.