Today's Review: Hitting Your Fingernail With A Hammer Several Times

We've been laying laminate flooring for a few days, and while it's been tedious and very frustrating I decided to add an element of fun to the proceedings. So in the interests of human curiosity and the advancement of the knowledge of our species, I took it upon myself to find out what happens if you hit your finger while hammering.

Let me reiterate that I intended to do this, as hitting my fingernail with a hammer several times by accident would be a silly thing to do. Anyway, onto the results. The first time I smacked my nail, the pain was quite immense. Bruising appeared after a very short time, and it was difficult to use my finger afterwards due to the pain from applying pressure on the injury. Still, it was bearable.

The second time was a doozy. Of course hitting myself in the exact same place with the exact same hammer two days straight would be an extremely moronic thing to do by accident, this was purely for science. After the strike the pain was even worse, and I found myself almost curling into the foetal position willing the pain to stop. Thankfully this pain soon passed, and not much more bruising was added to the nail. While the finger is still rendered slightly useless for taking DVDs out of cases, which I do a lot of at work , I can type and perform most other tasks with little discomfort.

Here is the result of my experiment: 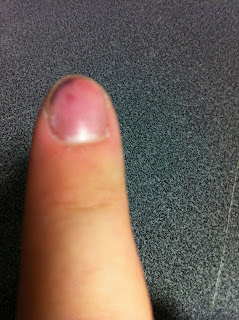 Overall, the experience, while initially causing a lot of pain, is not really painful most of the time, only when applying pressure to the affected area. Still, the only effects seem to be pain and an unsightly bruise, and I see no way in which the action of hitting yourself repeatedly with a hammer could be beneficial. Perhaps something happens after the fourth or fifth whack, but after two I thought it was a safe bet not to try again.