You know what I'm not too much of a fan of? Creme Eggs. They show up every Easter, and people go absolutely doolally over them because they're only out at Easter. They're not too bad to eat, I'll given them that. But every year they're smaller, and more expensive, and all they are is a chocolate shell filled with icing. You can feel your teeth rot as you eat one, but I guess that doesn't really matter, as long as it's a novelty egg shaped chocolate that you can praise the lord for upon its return.

But now it's time to cash in on another holiday, because someone at Kraft finally had the idea that "creme" sounds a bit like "scream", and so the Screme Egg was born. It's a Halloween themed egg, of course. What separated it from Creme Eggs? Well, the inside is promised to be ghostly green goo. 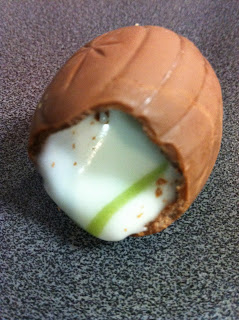 Oh wait, did you think it would be all green? Hey, me too. It's okay, we'll work through the pain together. Look at that though, come on, it's sloppy. With a Creme Egg I can understand the colouring, it's egg white and yolk. But this is a spooky version, I expect a large amount of ectoplasm when I bite the top off. Instead I have to scoop out the insides to find any trace of green. Perhaps an all green filling would be a bit too much though. I remember once when I had green ketchup and it made me feel a bit sick. The brain can do that to you, you know. But still, they could have made some more effort.

Or perhaps they could just quit with the tomfoolery. Everyone loves Creme Eggs, perhaps it's only because they're out at Easter, but if you're going to start bringing them out for other holidays, why not bring them out all year round? No need to buy batches of food colouring or come up with clever alternative name puns (the only one I could think of for Christmas is Creme Eggnog, that would certainly be an interesting flavour).

But no, shameless cash in it is. But still, everyone is going to snap them up, because they can't get enough sugar in goo form. And they feel guilty every time they just whip up some icing sugar in a bowl, scoop it up in their hands and shove it into their face in a cold dark room. Not that I know what that's like.