Today's Review: The Front Page Of The Daily Mirror Today 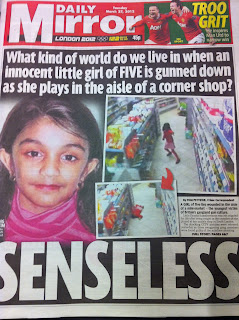 I don't know Daily Mirror, I imagine we live in the same world as always. One that's mostly okay but permeated with a few dicks and evil people. What kind of world do we live in where children all around the world are shot and trafficked for sex? The same one we've lived in for hundreds of years now. Except now we have sensationalist media profiting from tracking down the next monster to crucify.

Don't get me wrong with my liberal speech, it is a tragic thing, and it's good it's being reported, but it's not like they meant to shoot the girl. But gang shootings happen everywhere, and much worse in other countries. I can only imagine this article will lead to many complaining about the state of Britain today, and that inevitably leads to blaming immigrants for everything going wrong. That is the kind of world we live in.