At a loss for what to review today, I looked down the biscuit aisle at Tesco hoping something would leap out at me. 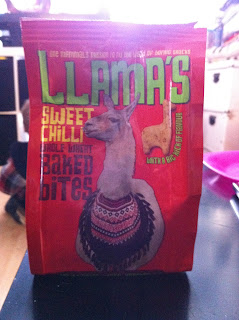 Yeah, that'll do it.

Llama's are a new snack food, I think, and a snack food with a story. Apparently there's a llama somewhere who emigrated to the UK and found all their snack food to be bland. So, being the resourceful llama that he is, he created his own snack food range with interesting flavours, with his hooves apparently. How they got past health and safety checks I don't know, but there's one thing that makes up for all of that. 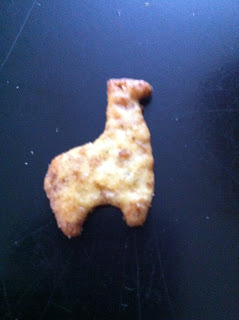 They're shaped like llamas! How cute. So forget about the logistics of a spitting mammal setting up his own snack food business and tuck in.

Llama's biscuits are actually pretty nice. If I had to make a comparison, I'd say they are the UK equivalent of Goldfish crackers, yet another US food that has been unfairly held close to home. The flavour is good, though not too overwhelming, and gives way to the baked wheaty texture of the biscuit itself, which I love. The biscuits are pretty small, so it's easy to mutilate tens of tiny llamas in one session, but I guess that's just a testament to their tastiness. So go and get some of this quirky snack food. I don't know how long they'll be around for.