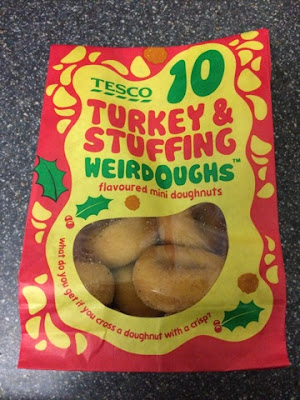 Tesco certainly aren't giving up on their Weirdoughs range, they've now brought out a festive flavour to go alongside the recent addition of smoky bacon. So here we have turkey and stuffing flavoured doughnuts. I can't say I've seen too many turkey and stuffing flavoured crisps, so perhaps these should just be emphasised as savoury doughnuts rather than crisp-based ones, but that's neither here or there, I was just looking forward to trying these.

The first thing I noticed when biting into these is how much the consistency really helps contribute to the flavour. It's a lot like eating the real thing, but in dough form. It's soft, slightly chewy, and it certainly has a very bold stuffing flavour, with a lovely meaty hint behind it. I think this is where the "cross a doughnut with a crisp" doesn't quite apply here, as there isn't any hint of crispiness, but that's a good thing. I didn't hesitate in wolfing these down, and every bite was just as flavoursome and soft as the last. For someone who doesn't really like meaty crisps, I certainly enjoyed these meaty doughnuts, and they'll definitely be an interesting addition to any spread this Christmas.