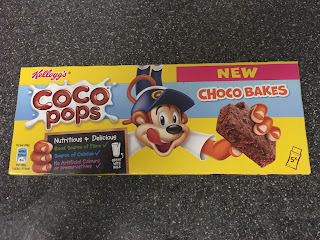 Hey kids, do you like breakfast?! Well, why not take more breakfast to school in your lunchbox, in cake form? Breakfast bars are by no means a new thing, in fact they keep popping up all over the place. Kellogg's seem to want more of that pie by doubling up on their Coco Pops lunch offerings. Well, it might be more than doubling, how many Coco Pops bar products are out there now? Anyway, these ones are Choco Bakes, which really have not much to do with the cereal. They're basically chocolate squares with some chocolate chips thrown in.

I think the rest of these will be confined to the lunchboxes. These aren't nice. I'd like to say you can't really go wrong with chocolate cake, but they have here. I'm not sure if it's more of an overly dense sponge or a light brownie, but you don't really want either to be fair. On top of that, it's dry. Considering how small these squares are, I found myself almost choking it down for a couple of mouthfuls. It's pretty tasteless too, a hint of chocolate but nothing that's much good. These are just bad bars, and they're trying to get them in your cupboards by pushing the health agenda. The box says they're a "source of calcium". Well, my teeth are a source of calcium, but you don't see me chowing down on them, although that might be more enjoyable. Nah, I'm kidding, that was a bit harsh. It might be just as enjoyable.